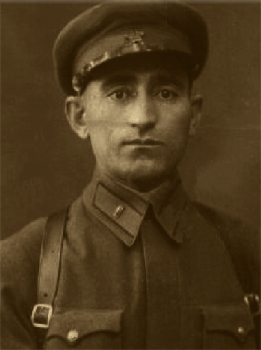 One of the most re- spected Dilbazis’ representative. After his parents’ death two year-old Nadir was taken care of by his maternal grandmother Teyba. The grandmother’s family was rather big and they lived in poverty. In 1920 after his grandmother and younger sister Ayna’s death the chair- man of the committee of poverty Ragim Soyunkhanov placed the boy at the orphanage house headed by Olga Georgievna Lisenkova-Vekilova from Saint-Petersburg. As years passed, grown up Nadir returned to his native village. To earn a livelihood he worked as a hired hand at the same time learning at evening school. After the establishment of the kolkhoz in the village he was enrolled in it and then became a member of Komsomol.
In September 1930 Nadir was called up for military ser- vice where taking into account the young man’s literacy he was enrolled in junior commanders’ school under the 77th Azerbaijan division in Ganja. Upon finishing school Usubov as an expert of military and political training was appointed platoon executive and elected secretary of the komsomol committee of the regiment. At the decision of the political department of the division he was sent to study to the political school of the Trancaucasian military district.
His career growth as a military man began. Upon finish- ing political school in 1934 with excellent marks he got a po- sition of a political instructor at junior commanders’ training school under the 230rd rifle regiment in Ganja and later he was appointed unit commissioner of the 77th divi- sion quartered in Baku. In 1938 Usubov was sent to the regi- ment school of the 4535th regiment of the Kiev Military district quartered in the town Belaya Tserkov.
In 1939 he was transferred to a position of hospital com- missioner of “Odevovo” hospital located in the town Nikolaev. Later he was transferred to Yalta to a position of commissioner of the Central military resort house. When war broke out Usubov was in the Crimea.
During the first days of the war Usubov worked in a sorting hospital of the 51st Army which headquarters were in Simferopol. After being wounded Usubov was trans- ferred to Novorossiysk. Upon recovering he was appointed battalion commissioner in the 22nd engineer combat bri- gade of the Stalingrad mili- tary district where from September 1941 to February 1942 he was engaged in the construction of defensive lines in the Morozovskiy dis- trict on the city’s fringes.
Due to health deteriora- tion Usubov got into hospital ¹ 379, then he got a month’s
leave and arrived in Baku. After the leave he was transferred to the political unit of the 402nd division of the 45th Army which headquarters were in Nakhchivan. Here he successfully fulfilled a very impor- tant mission to destroy the German airborne force in the area of the Ganlygel lake for which the Supreme Council of the Nakhchivan ASSR awarded him with the Certificate of Merit.
This fact did not escape the attention of the 45th army command and in November 1942 he was sent for a 3 year study to the Military-Political academy in Moscow. However he could complete only the first year as due to the ag- gravation of the situation at the front the academy was closed down. He was transferred to a position of a com- mander deputy on political work of the 161st guards regi- ment of the 53rd division of the 1st Attack Army of the Baltic front. He took part in the battles against the German troops in the Estonian direction.
Early in 1945 after the disbandment of the 3rd Baltic front the regiment was deployed to the 2nd Baltic front and Usubov was appointed a deputy commander for political affairs of the 19th guards regiment of the famous 8th Pamfilov’s division which took part in intense battles in the direction of Shaulay, in the neighborhood of Tugur, Maur and Buldar.
After the war Nadir Usubov remained in this division holding the same position. Later he continued his service as commander deputy on political work of the 647th infantry regiment quartered in Baku. From 1948-to 1956 he worked as a military commissar of Evlakh and Agdam districts, Ganja town. He retired holding the rank of Lieutenant-Colonel.
During the years of military and civil service he was awarded with 24 orders and medals including the Order of Lenin, two Orders of the Red Banner, the Orders of The Patri- otic War of the1st and 2nd Class, the Order of the Red Star.
There is an interesting fact from Usubov’s military bi- ography. During the war he saved an officer’s life who after years became Marshall and Minister of Defense of the USSR. This man was Dmitriy Yazov. At one of the military officers’ meeting in Moscow Yazov himself came up to Usubov and addressed him by name and surname remind- ing of that fact. After the bloody January events of 1990 in Baku which were organized under Yazov’s personal super- vision Usubov sent him a telegram full of condemnation for what he had committed. Yazov replied only after 4 months. In his letter he apologized for his actions but added that as a military man he had to carry out the order of the political leaders of the USSR.
According to his will Nadir Usubov was buried in the cemetery where there are graves military men who died in military hospitals of Ganja town next to the memorial erected in their honor.
Nadir Usubov and his wife Nushaferin khanum had four children: Elmira, Elvina, Niftaly and Khatira.